Each week, E-Learning Heroes post a new e-learning challenge for developers to complete. The idea is to try something new, find inspiration or showcase your skills. Visit the Articulate Community webpage to find out more about the different challenges.

I’ve been meaning to participate in an e-learning challenge for a REALLY long time and finally got round to it. Challenge number #222 is my first attempt and this post outlines how I created it. 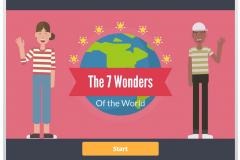 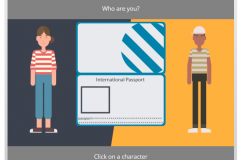 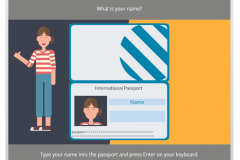 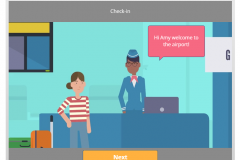 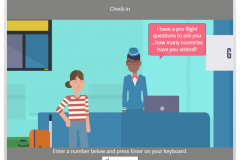 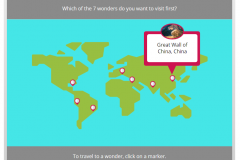 I recently started using the cloud-based animation software Vyond. I decided that I wanted to try combining Vyond with Articulate as part of my challenge. I also decided that the first challenge I would attempt would be #222 and the description is below:

Using variables to capture a learner’s name is one of the most common ways to build more personalized and dynamic e-learning. It’s also one of the easiest ways to begin working with variables and variable references in e-learning. And that’s what this week’s challenge is all about!

I really enjoy using variables in my designs; creating different scenarios and routes. I decided to create a demo and found inspiration whilst watching a travel program on TV. I decided that my challenge would be based on the 7 Wonders of the World with a gamification feel.

As this challenge was for fun (and for myself!) I didn’t storyboard the initial design, as I had an idea in my head for the look and feel. I decided I wanted to create an e-learning demo to teach 10-year-olds’ about the 7 wonders of the (modern) world. To meet the criteria of the challenge, I wanted to include the following interactions (all using variables).

Using : I created the images and videos using the contemporary character set. I was extremely proud of the design of my “passport” – the software didn’t include a prop for this so had to create one myself.

Using Articulate 360: I created 1 introduction slide, embedded the introduction mp4 and included a start button. I then designed a “pick a character” scene followed by a scenario of 4 slides (and included the use of a few layers). I designed the first scenario, then duplicated the 4 slides and changed the character from a girl to a boy. I used 4 variables in this project:

Technically, I only really needed to include 1 variable for the name input, I like to create separate variables for each scenario for consistency (and you never know where you might use it later on..). After the learner has entered a name, I then declared the variable in the interaction with the airport staff.

I really enjoyed creating this mini demo for the e-learning challenge. I concentrated more on design rather than the learning content. I really wanted to experiment with Storyline, variable, scenarios and and I’m happy with how this little project turned out.

You can access the final version of this learning course here. Please note, in order for this to display as intended, you should use Google Chrome.

This site uses Akismet to reduce spam. Learn how your comment data is processed.