Whilst working as a contractor for ADP, one of the bigger projects I worked on was a piece of e-learning developed in Articulate Rise. The topic of the course was retroactive payroll which was targetted at clients (external) and associates (internal). 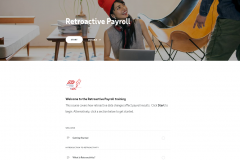 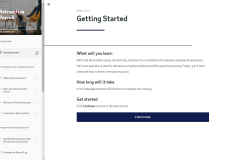 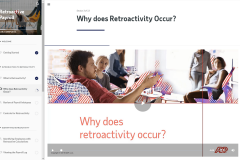 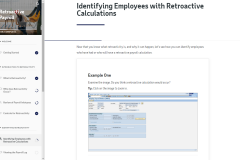 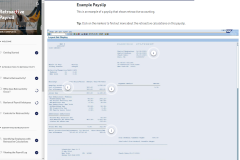 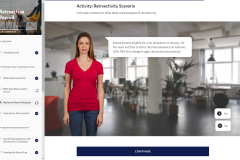 As the topic of retroactive payroll was fairly small, we decided to create a micro-learning module in Articulate Rise. This would include some short videos and activities. I didn’t storyboard this project as it wasn’t a requirement and would have added additional overhead. When I create projects in Rise I tend to storyboard as I go within the application, as most of the time I’m using company branded logos, brand colours, fonts and styling.

I should also note here that I didn’t write the learning outcomes for this project as they had already been written as part of the solution summary analysis, completed at the start of the project. The project documents were handed over to me and I purely acted as a developer.

By the end of the project, I had created a Rise course to be hosted in the company LMS. As well as the Rise “shell” I created the following:

There were several ways to identify retroactive calculations and I wanted to design the activities to present the data to the learner in the best possible way. And also make sure they were memorable.

I worked with an SME who provided me with some technical content and user guides as well as a demonstration of how to identify retroactive calculations. I had access to the software (SAP GlobalView) and a test database. I had several meetings with the SME who ultimately signed this off.

One of the ways to identify retroactive calculations was on a payslip, so I used a dummy payslip to create a hotspot activity, which signposted important areas of the payslip to the learner. The learner could then click on each of the markers to find out more information.

I created the explainer video in Articulate Storyline 360 and used some ADP icons to demonstrate the theoretical concepts behind retroactivity. I created the demonstration video using Camtasia; I used the screen recording tool to capture various screens and walkthroughs in GlobalView.

I created a few mini GIF images using Snagit – the idea behind these is that they would act as helpful snippets for instructions that are around 3 steps in length. I could have created these as mini videos, but the video would have been about 5 seconds long, so it seemed a bit like overkill.

The SME provided me with three small example stories of retroactive calculations which I decided to turn into an activity using the new Rise scenario block. I introduced three characters and used the content to create three small scenario/assessments. It worked quite well, however, if the content had been longer I would have had to use another method of displaying this information as the scenario block has a character limitation.

There were no formal assessments or a passing score for taking the course, it was purely instructional and informative, but I thought it would be useful for the learner to assess their knowledge by completing a set of show and tell questions. There were three in total; the learner was presented with an image of SAP GlobalView and asked if they thought retroactivity would occur. The questions were single choice answers and learners were given feedback after making their choice.

I enjoyed working on this project as I was able to use a variety of tools to create a diverse set of activities suitable for the topic and content provided.